I was pleased as punch the moment that I stepped ashore in Aruba. It’s been one of my favorites from the beginning and I couldn’t wait to explore it further. I did something a bit out of the norm and booked a tour through Carnival that gave a tour of the island. Normally, because I am so comfortable on that island I would have just hired a local and saved quite a bit of money. The tour did not disappoint and gave me an insight to the island that I didn’t quite see before.

I will say the one thing I did not like about the tour was the uncontrolled chaos that was in the terminal. Those in charge of getting us lined up were not doing a good job and I spent an hour getting pushed, shoved and moved in all sorts of directions. Eventually, I am happy to say I did make it onto the air conditioned bus. I also think that my tour guide, Bird made up for it as he took us the opposite way of the rest of the tour buses. Which allowed us to be the only one at the stops and gave plenty of photo opportunities. 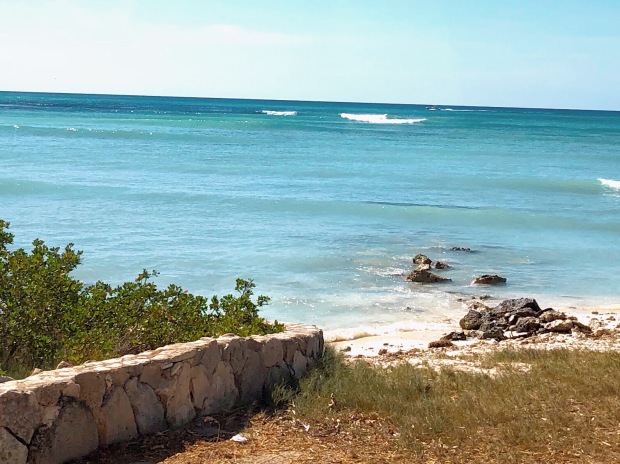 The first stop was at the California Lighthouse which rests on top of a coral hill of sorts. The entire land is either coral, quartz or lava rock making most of it conservation land and almost impossible to get things to grow. This lighthouse got it’s name from a shipwreck that happened on that side of the island, as the ship was named the California. Along the way we were also shown a red buoy out in the water where a German World War II war ship was sunk making it a perfect diving spot for tourists. That’s right, be careful because Aruba has a sense of humor and will turn almost anything into an attraction.

The California Lighthouse named after a ship that crashed into the island around that area. This lighthouse sit on top of a large hill made completely out of white coral and sits in a preserved area. 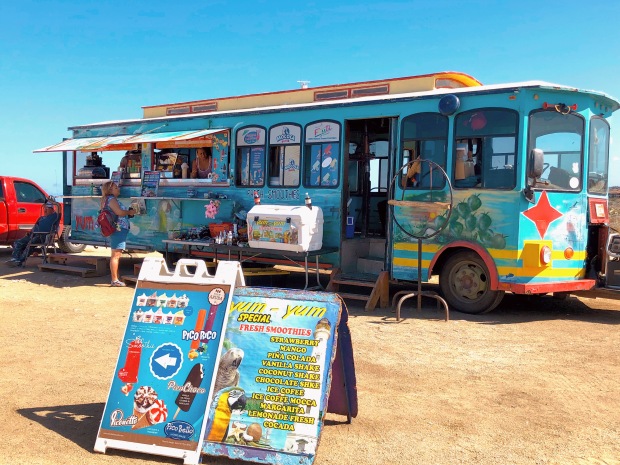 This restaurant has the best views and the best marketing strategy. I’m still headed to Gianni’s after this…

We winded through millions of cactus to the North side of the island until we reached a quaint little chapel on the sea side. The Chapel of our lady Alto Vista is an adorable church surrounded by plenty of seating to accommodate more people outside. I actually thought it was brilliant that they pretty much built an ampitheatre around the chapel. After all, there should be no limit on who can attend church. 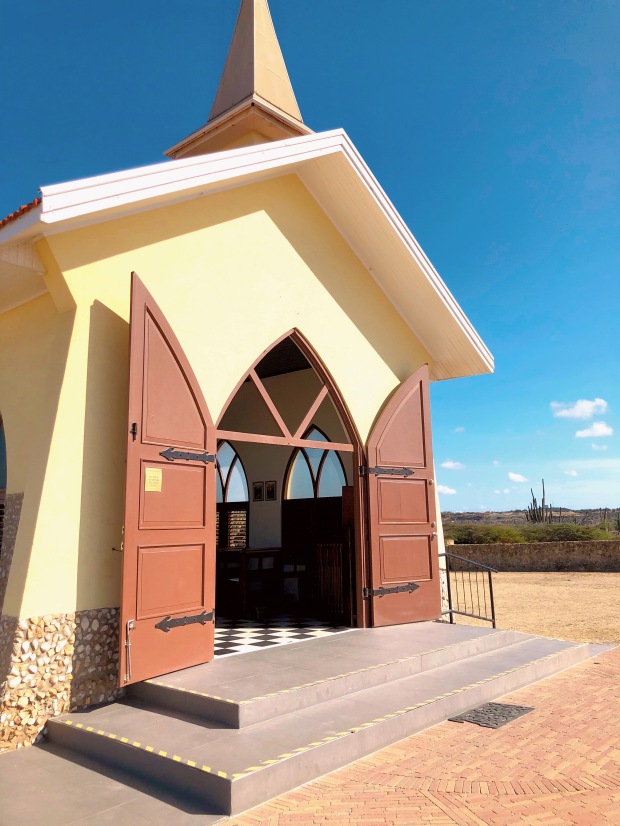 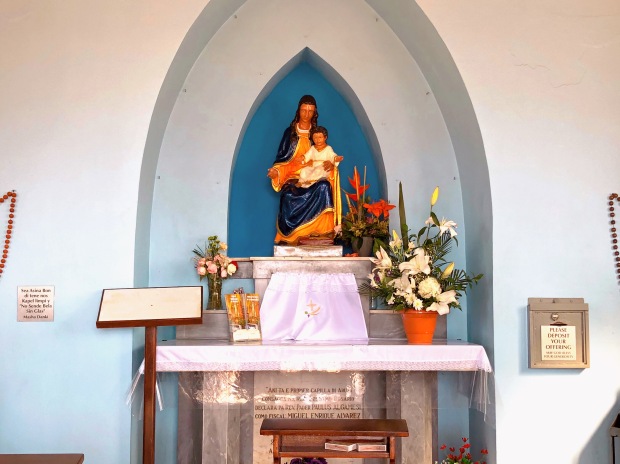 I LOVE going into Churches and Chapels in different countries. This one was filled with lit candles on the sides and the amount of people from the tour that immediately took seats to pray was heart warming. 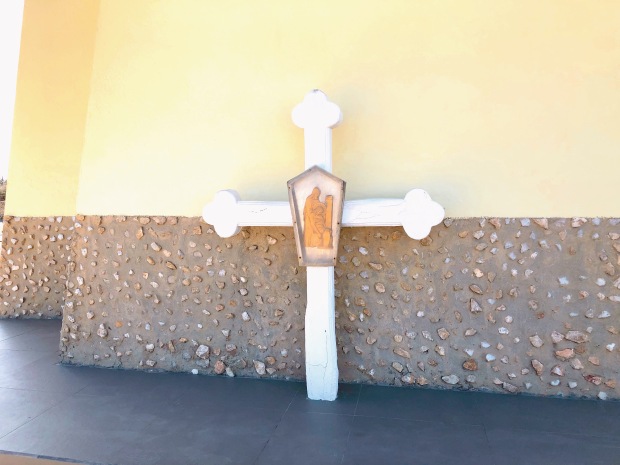 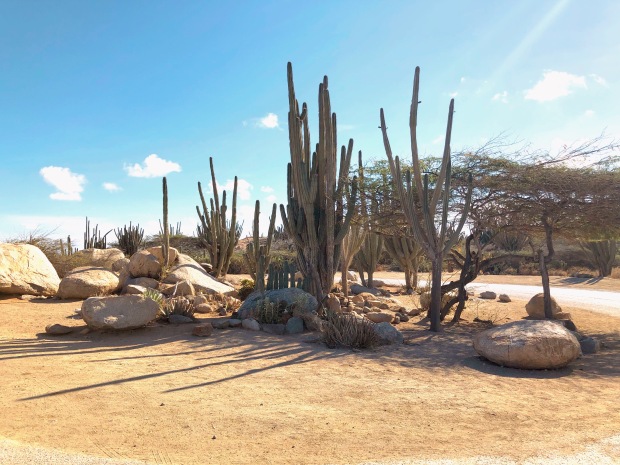 The third stop took me further east but remained on the north side of the island. The north side is known for being super windy, rough waters and has frequent shark visitors. All of that combined with land conservatory means that no one actually lives on that side of the island. It is completely untouched desert complete with sand, cactus and lots of lava rocks. We were brought to a natural bridge, two actually. The big bridge collapsed a few years ago leaving the baby bridge as the main attraction. However, it is clearly advised not to onto the bridge as it is also ready to collapse any day. It was a fun stop that held reminders of the natural beauty of our surroundings. 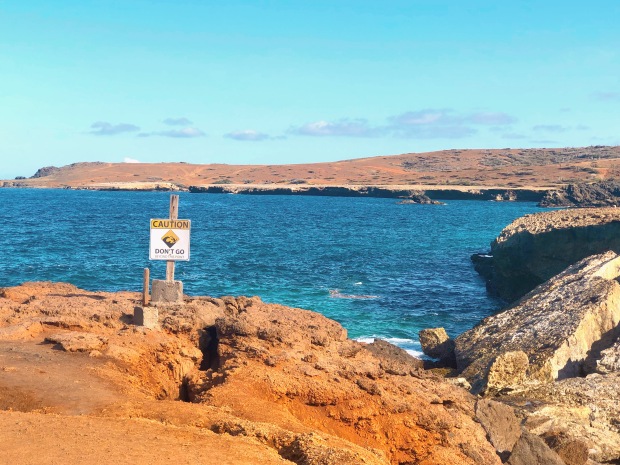 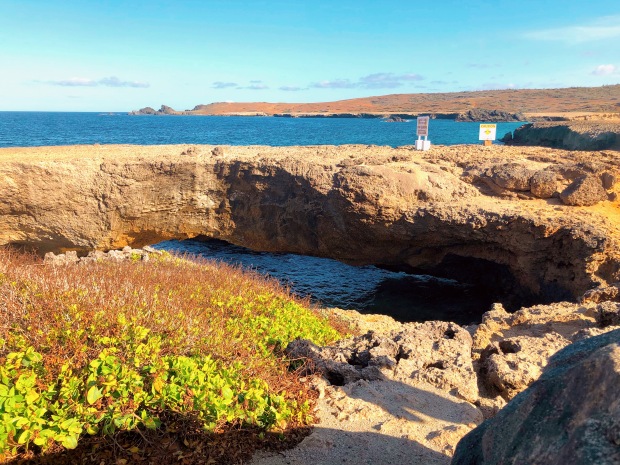 Big Natural Bridge – Came crashing down in 2015. Hence all of the signs not to walk across them.

The final stop on the tour had me climbing a boulder. Yes, you read that right. I climbed a giant rock in a sundress and flip flops. The natural rock formation with surrounding botanical gardens was another natural beauty to see. Once on top it gave 360 degree breath taking views of the island. I gotta admit, I fell for Aruba’s charms even more. 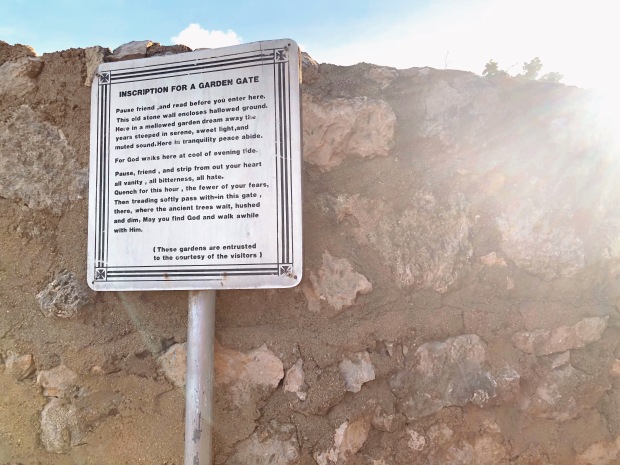 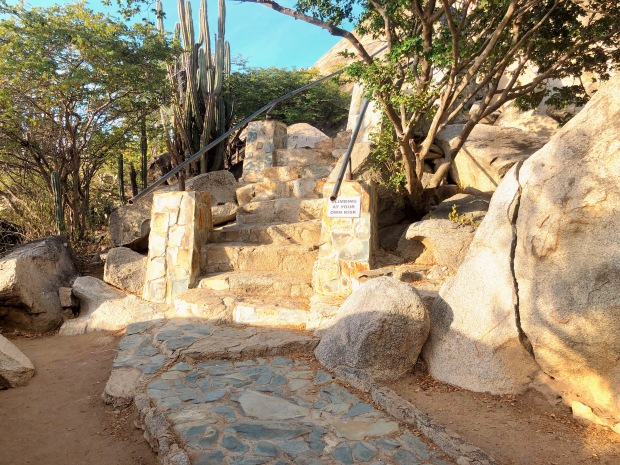 We weren’t shown these stairs… These were the way down.

Yup, I’m going to climb it! In a dress… and flip flops…

The way up included climbing the boulders, ducking, crawling through spaces and using the rocks on either side of yourself to hoist yourself up. Once at the top, we saw the stairs to get down. The struggle was real. Actually the steps were very uneven and weird.

I finished my long day in Aruba at Gianni’s of course! No pictures of this return visit, but you can read all about the restaurant from last year’s post here. What better way to end my island adventure than with amazing pasta and a cannoli.

Gianni’s for dinner! This time I had meatballs with mine and brought my leftovers back onboard. I had a fridge in my room so I totally ate this for breakfast!

Heading to Aruba and want tips? Feel free to reach out! It’s definitely one of my favorite islands. Have a blessed week y’all! 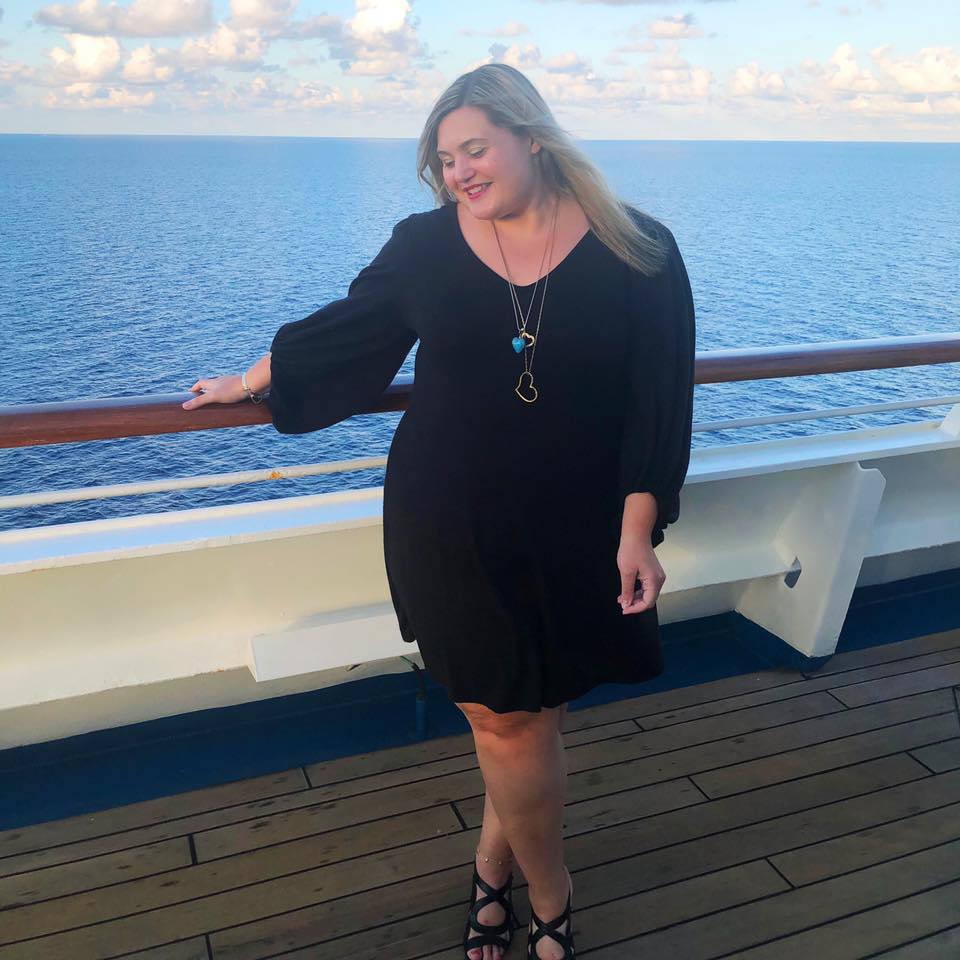