Panama Canal is officially the southern most point that I have sailed to, and let me tell you that day was a journey on it’s own. This destination was the reason why I went on my specific cruise this year and I now have the honor of saying that I’ve done it twice. All the way through, turned around and came back again. 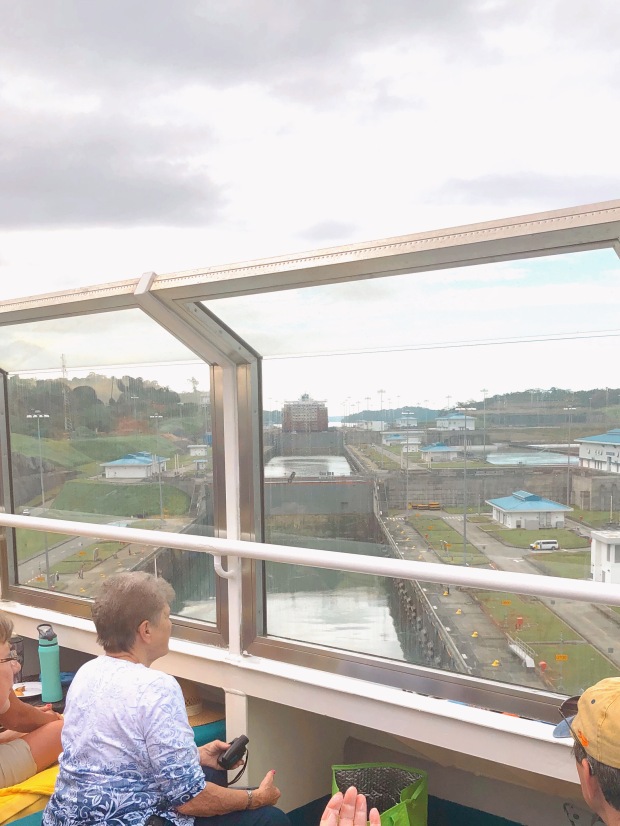 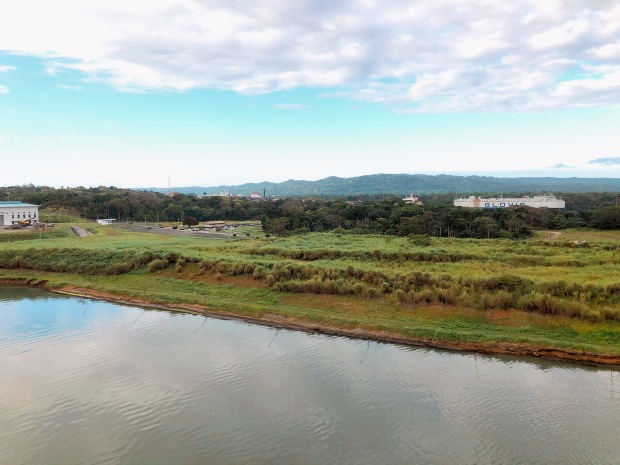 I had asked the crew members the night before what to expect, as this wasn’t a normal port or sea day for that matter. The ship treated it as a sea day and that was about the only thing that I was expecting. I was told to head up to the top decks around 7am to claim my spot and we would enter the canal around 8am. That wasn’t quite what ended up happening.

At 6am (ship time) a voice came over the loud speaker as our tour guide for the canal. I was asleep, but this certainly woke me up and got me moving fast. After I got up to the 12th deck I learned that some people had gotten up there at 4:30am to stake out their spots for the grand event. Just so we are clear, I am not a morning person. I am probably the least bit of a morning person that non morning people have ever seen. Thankfully, I swung by the lido deck buffet on the way and picked up a plate full of bacon to enjoy while sipping my coffee on deck. Which means I started my day sipping on coffee and eating bacon while watching the slow moving process of going through the canal. 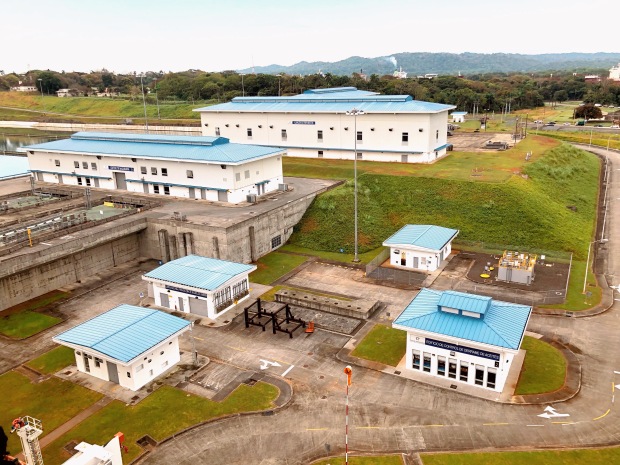 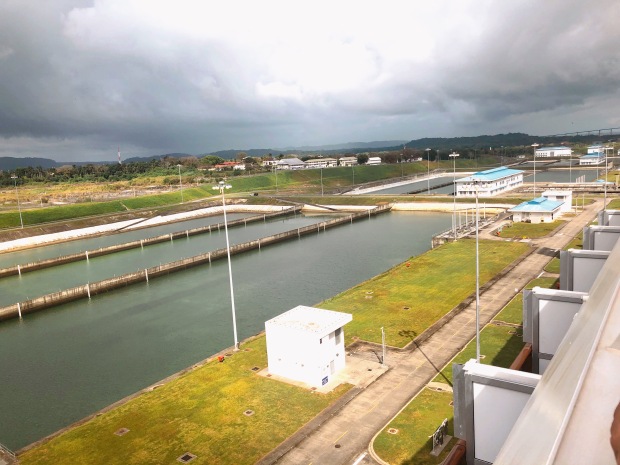 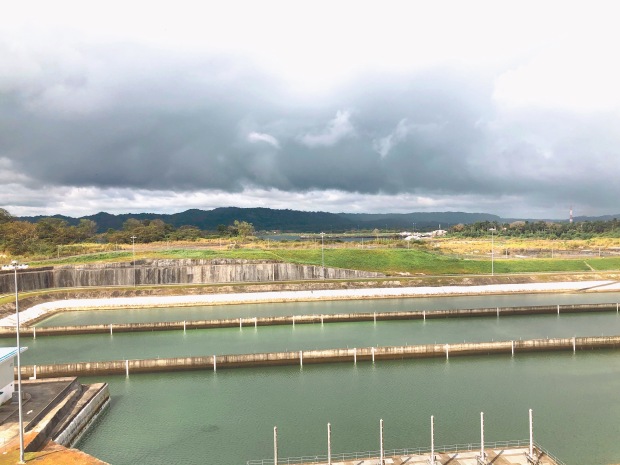 Since the ship is so big we headed through the newer canal, but still had some views of the original nearby. There are three chambers each raising or lowering the water to get you through to the other side. The whole thing took about three hours to go one way. Around 8am we were entering the last chamber and I went to breakfast. Best idea ever! Having a window view at breakfast gave a totally different view of the process, so it’s something that I definitely recommend. Go to different decks at different points throughout the process to get the full effect. The dining room actually has the best views, especially when I was at lunch!

After we made it through to the Pacific side of things the ship turned around and got in line to go back through once again. Y’all, I was exhausted. I’m not good with interrupted sleep. I’m writing this at 4pm the same day pool side and I’m still tired. I know, tough life over here. But that’s when I decided to take my first nap. I was in a deep sleep until that pesky tour guide came on the loud speaker once again. 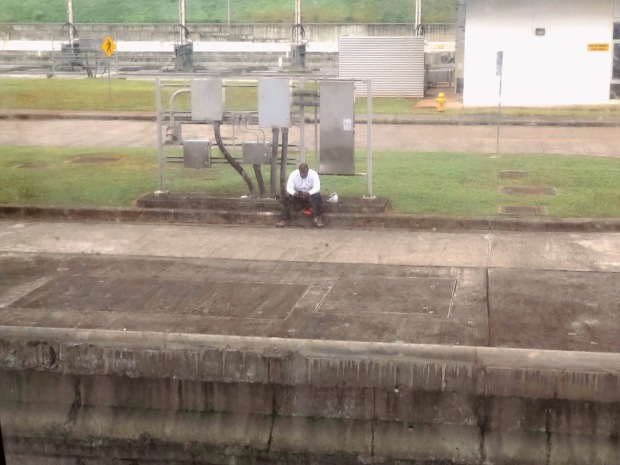 This guy won my entertainment during breakfast. He was texting, talking on his phone… all while the other workers actually worked. 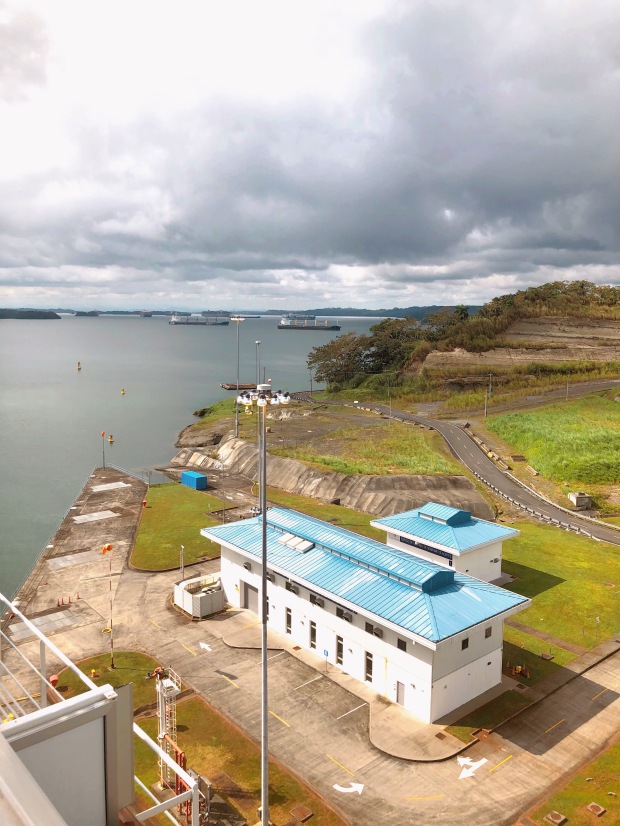 At 11:30am we were finally heading back through to the Atlantic side. This time, I headed to the dining room for lunch. Best idea ever! The wonderful waitstaff sat me at the very back of the ship against the window. I had the best seat in town for all three of the chambers watching the walls open and close. As well as the tug boats until finally we were out into the river headed into the Caribbean Sea once again which was around 2pm. After all of this excitement I headed for my second nap of the day. 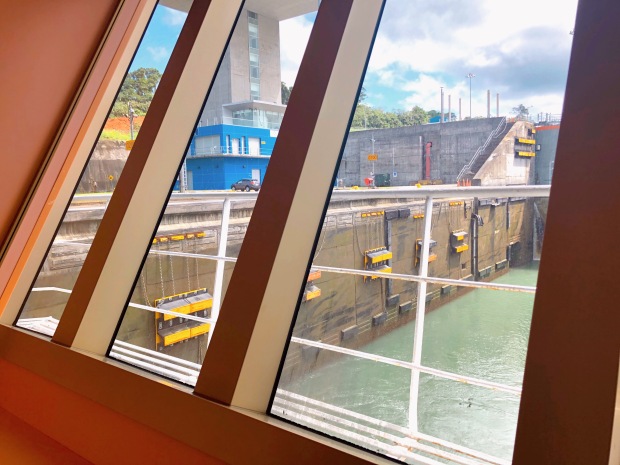 I woke up about an hour ago (3pm) to find that we haven’t actually gone anywhere. The Canals are in the distance and a barge seems to be refueling us. Pop up shops have appeared on board filled with Panama souvenirs as this was an onboard experience and the lines are insane. I am currently drinking an iced coffee poolside. I told you, rough life.

Wanting to go through the Panama Canal? Best advice I can give is to wander different decks to get the full experience and different views. Since I am back home by the time you are reading this I will for-see that I am missing my sea day napping schedule and iced coffees by the pool. Pray for my adjustment period! Have a blessed week y’all!

How many workers does it take to change a lightbulb?

Apparently I’ve got festivals down to an art! 💁🏼‍♀️ Who knew!?! I’m sharing details from the Michigan Mac & Cheese Fesitval on LipstickLattesandPearls.com this week. 🧀
Now that’s how you make an entrance at the Big House! 💁🏼‍♀️💙〽️
We. Are. MICHIGAN! 💙〽️🏈🙌🏻 Birthday Season has kicked off in a rather spectacular fashion. It’s a glorious day today at the Big House for some football! 😘
When your house is ready for the game tonight! 💙〽️🏈💁🏼‍♀️
In the midst of the lessons I’ve learned this Summer, I’ve had a blast getting some #Mermaid time in! 🧜‍♀️ From driving at high speeds, splashing around in Mermaid Lagoon, lake hopping, to lounging on the bow. Even with a sprained ankle! 🤣🌊🚤
It’s been a while. What have I been up to this Summer? I’m sharing the highs and lows on my LipstickLattesandPearls.com this week.